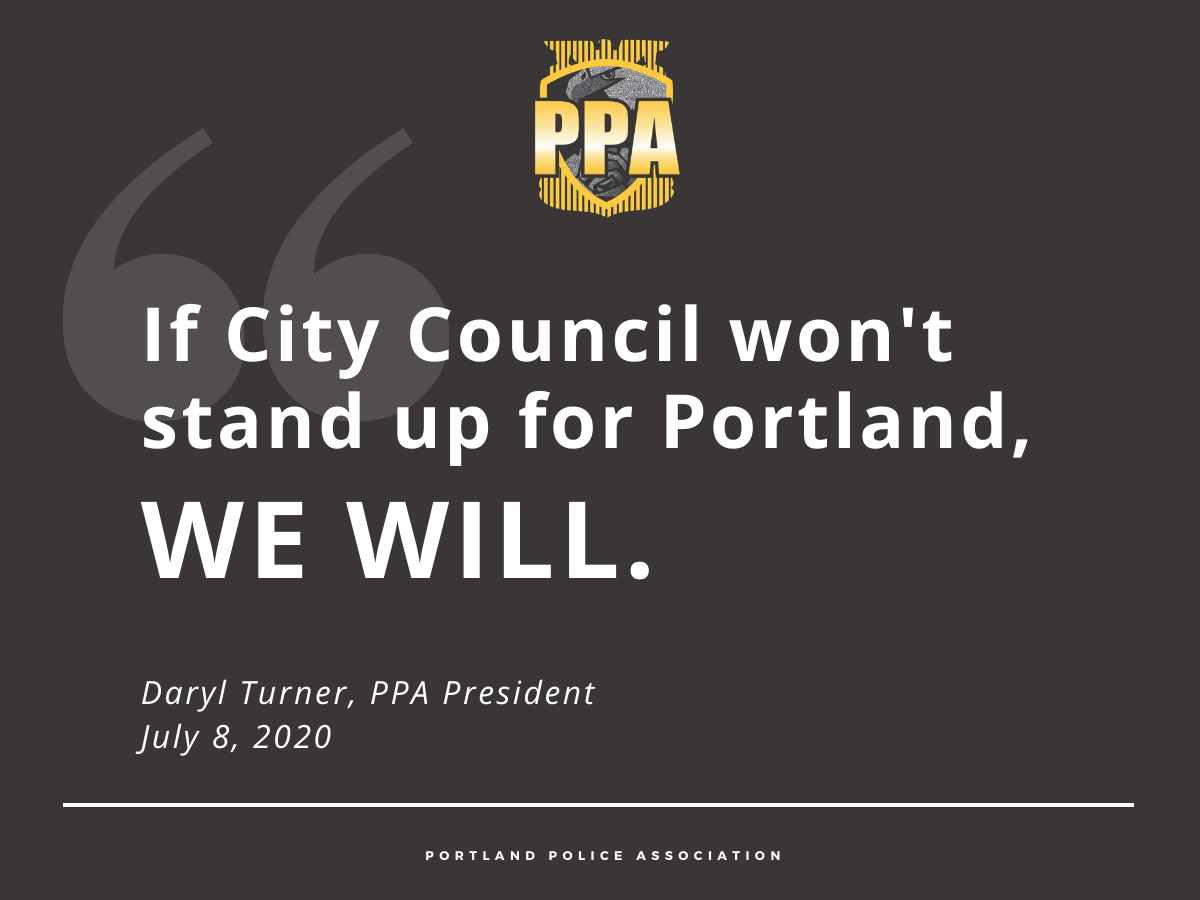 We Will Stand Up for Portland

A unanimous Portland Police Association Executive Board has no confidence in City Council.

While Mayor Wheeler has condemned the destruction of our City, his voice has been drowned out by his fellow City Council members’ hyper-fixation only on police behavior. That, as Senator Avel Gordly has so aptly said, “is our Achilles heel as a City at this moment of truth speaking.”

On Monday, the PPA called for our elected officials to stand up and defend Portland. We called for them to condemn the violence and the burning, looting, and destruction of our great City. We called for them to stop granting permission to those few individuals who use violence and chaos to selfishly draw attention away from the calls for social and racial justice that need to be heard. The rioters’ total disregard for people, property, and the law defines and embodies white privilege and entitlement, especially when they burn and loot communities of color.

Throughout the violence against our City, our officers have endured weeks of rocks, bricks, bottles, mortars, and other objects hurled at them with hate. Our officers have endured insults, many of them vile words filled with anger. And it’s not just the officers protecting the Justice Center and downtown that have faced that treatment; it’s also the officers serving the rest of our communities that have been painted with a broad brush, all of them being deemed “racists,” “white supremacists,” “murderers,” “pigs,” and the like. Members of our own City Council have used those exact words to describe our officers.

Enough. The people who put on a badge and uniform every day are human beings. We hurt, we bleed, we grieve. We are mothers, fathers, daughters, and sons. We are Black, White, Asian, American Indian, Pacific Islander, and Biracial. We are LGBTQIA+. We are proud military veterans and college graduates. We are humans. We are members of the Portland community.

Our City Council should stand up and remind our communities that we must work to heal our City, not destroy it. Violence in our streets does not fix social and racial inequities. Burning down the Justice Center or destroying a federal courthouse brings no one justice.

If City Council won’t stand up for Portland, we will. The PPA will be pushing two initiatives forward that are focused on community safety, police funding and reform, and internal and external racial equity.

Pastor Rev. J.W. Matt Hennessee and I will hold standing, quarterly roundtables that bring together police and our community. We will be inviting members of the faith community, local community members, local law enforcement executives, local law enforcement officers, and local and state elected officials to attend. The simple act of sitting together and talking can be profound. We want change. We want healing. We want to ensure that we protect all Portlanders and give them a constructive, meaningful opportunity to speak openly and freely about social and racial justice. To get there, we must continue to engage with one another. We must continue to have difficult conversations.

We won’t stop there. The words “police reform” don’t scare us. In my 29-year career, I have evolved daily as a person and as a police officer. And every day, the Police Bureau has grown and improved as an organization. Now is the time to continue growing, improving, and evolving. Defunding police in our City will not improve or reform the police. To reach those goals, we must invest in our Police Bureau. To that end, the PPA has announced an eight-part reform platform based on reasonable and constructive efforts to improve policing services for all of Portland, available at www.fundpolicereform.org.