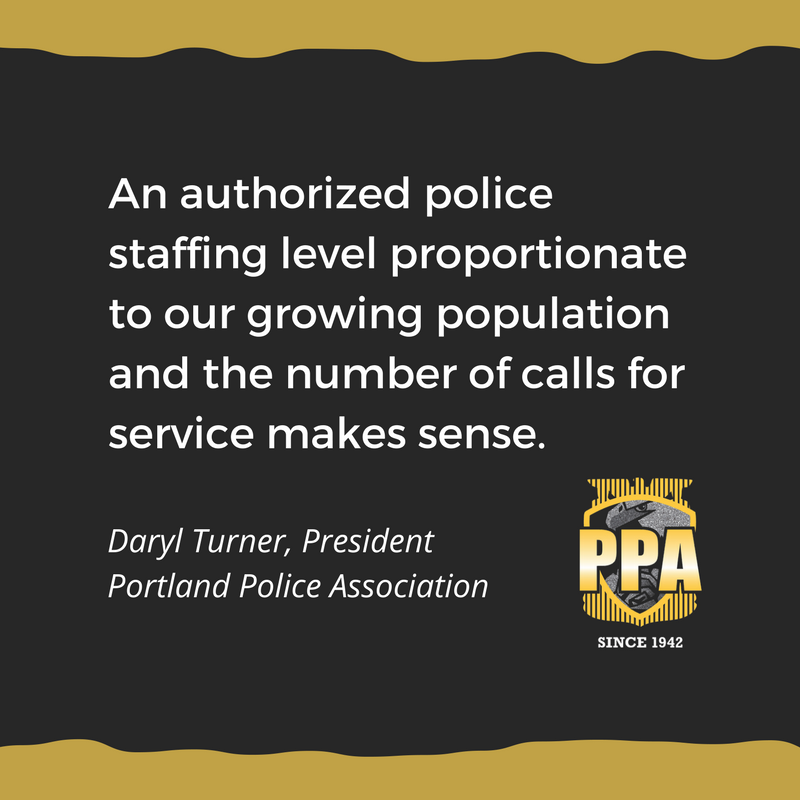 As 2017 wrapped up, Portland Mayor and Police Commissioner Ted Wheeler reflected on his first year in office applauding the progress made by City Council on the issues of homelessness, livability, and public safety concerns. While he credited City Council and other Bureaus for contributing to the success of his administration, the Portland Police Bureau (PPB) and the short staffed, rank and file officers were omitted from commendation. And unsurprisingly, there were gaping holes and inconsistencies in his statement, in particular, regarding public safety and policing.

It would be negligent to not address the most egregious inconsistencies:

Increased the City’s capacity to post and clean problematic camping. We are now able to address 30-40 camps a week compared to under 10 previously. Provided active and consistent support and direction for Portland Police to address structures on public right of way and increased efforts to address crime.

The ramifications of increasing the responsibilities of the already short staffed officers without increasing staffing levels creates problematic gaps in police services to all citizens in the City of Portland and endangers the safety of officers responding to calls for service. When police resources are spread so thin, cover is not readily available and the response times for calls for service are adversely affected.

There is no question that addressing the livability issues caused by problematic camping and crimes of opportunity that often accompany these camps should be a public safety priority. But with the current, fragmented social service structure and the affordable housing crisis, many of the most vulnerable in our society are relegated to moving their campsite every couple of weeks, never getting the services they so desperately need.

Eliminated the 48-hour Rule to ensure officers involved in the deadly use of force are interviewed by Internal Affairs within 48 hours of the incident.

In an effort to continue to build community trust, the Portland Police Association (PPA) agreed through contract negotiations to eliminate the 48-hour rule from its contract during former Mayor Charlie Hales’ administration.

Developed a policy, reflecting national best practices, for obtaining compelled statements from officers who are involved in a deadly use of force incident.

In 2010, the PPA adopted a policy in which the legal counsel to members involved in an officer involved shooting was to only give compelled statements.

Increased the authority of the Independent Police Review to recommend discipline when officers are found to have violated Bureau policy.

The Independent Police Review (IPR) and Internal Affairs (IA) will have the authority to make recommendations as to whether an employee’s conduct violates or does not violate PPB policy. Neither IPR nor IA has the power to make disciplinary determinations. The power to make final disciplinary decisions continues to rest with the Chief of Police, the Police Commissioner, and ultimately a labor arbitrator under the collective bargaining agreement.

Authorized an additional $2 million to recruit and hire more officers.

In the Fall Budget Monitoring Process (BMP), City Council declined to fund the requested 85 PPB position and instead authorized funding for 10 over hires from the previous year and 10 for the current fiscal year.

“The fact of the matter is that since I took office, we substantially increased the resources going towards foot patrols. We had six, different neighborhood patrols stood up this year. The City Council just authorized another $2 million in the Fall BMP to increase the number of foot patrols on the street. The new Police Chief has committed to enhancing our police patrols and increasing the number of police we have on board. As I said earlier, we are down about 300ish police from where we are historically and what we need to have a full community policing model.”

Mayor Wheeler has never publicly supported permanently increasing the authorized strength of the PPB nor has he proposed a plan for implementing such an authorized increase. What is Mayor Wheeler’s plan for implementing a full community policing model and bringing on 300 more officers? The citizens of Portland and rank and file officers of the PPB deserve a tangible action plan.

Last spring when Mayor Wheeler and City Council voted to disband the Mounted Patrol Unit (MPU), those five authorized sworn positions were removed from the authorized staffing level. For decades, the MPU was one of the most effective “walking beats” in the downtown core area. The disbanding of the MPU added to the growing responsibilities and call load of the already short staffed district patrol officers.

During contract negotiations under former Mayor Charlie Hales’ administration, the PPA agreed to conversations regarding a Community Service Officer program. Thus far, since the ratification of the PPA contract in November 2016, we have had only three conversations regarding this program. There can be no program implemented until the City of Portland, the PPB, and the PPA can agree on hiring practices, training, policies, and an implementation date. There has been no program implemented and no agreement between the PPA and the City.

This claim is inaccurate and especially offensive.

“When proposing this years’ budget, the mayor and police commissioner also implemented a community policing program, which has officers step out of their cars to get to know the community they serve.”

Portland Mayor Ted Wheeler looks back on first year ‘governing from one crisis to the next.’
The Oregonian, December 22, 2017.

Mayor Wheeler did not create Community Policing; the concept and practice has been in existence for nearly three decades and is the standard for policing in departments, agencies, and bureaus across the country.

Over 26 years ago when I was hired at the PPB, one of the first things I was taught was that when you work a district, you get out of your car, you walk into all the businesses, you knock on the doors of residents, and you introduce yourself and make personal connections every day.

This is not a new concept created by this administration or by any Mayor of the City of Portland.

Improved the 911 response system at the Bureau of Emergency Communications to bring a host of new technology to the call floor.

In actuality, the new system is more complicated, cumbersome, and time consuming which, along with inadequate staffing, has led to an increase in call response time which begs the question of whether it is, in fact, improved.

As the President of the Portland Police Association working for the rank and file who protect and serve our diverse communities every day, 24/7, 365 days a year, I will continue to be consistent and unyielding in advocating for an increase in authorized staffing. An authorized police staffing level proportionate to our growing population and the number of calls for service makes sense. It is time for our elected officials to stand in support of our police, our public safety, our citizens, and our city.