RE: Riots in East Portland

Over the last two nights, we have seen premeditated attempts by rioters to burn down East Precinct, which is connected to residential apartments occupied by general members of the public. The people intent on rioting, violence, arson, and assault are not peaceful protestors; they are criminals who come prepared with helmets, masks, shields, fake “press” passes, rocks, mortars, fireworks, and other handheld weapons. They were not peacefully using words or signs or protest to enact social reform, racial equity, or police reform; they were wielding weapons meant to destroy property and harm people. Here are some examples of the weapons carried by rioters just last night, including a loaded handgun:

Twice in the last two days, these rioters have accomplished their mission: chaos and destruction. That is because the Police Bureau’s operational direction from the Police Commissioner and City Council is to let the violence escalate almost to the point of no return, and only then can the Police Bureau intervene. That is insane. Police should have the latitude to prevent crime, not watch it happen and only intervene after the fact.

It does not stop there. Although the Police Bureau has made 21 arrests in those two days, I have no doubt that those arrested will get away with their crimes without any consequence or accountability from the District Attorney’s Office.

As Police Commissioner and District Attorney, your primary jobs are public safety, not politics. You are failing. Do not bother asking the many, many officers who have been injured by rocks, bottles, and mortars hurled at them with the sole intent to injure. Do not bother asking the many female and Black officers who have endured racial slurs, threats of rape, and threats to their personal and family safety. Neither of you seems to care much about the officers.

Instead, ask these two elderly women about their experiences last night: 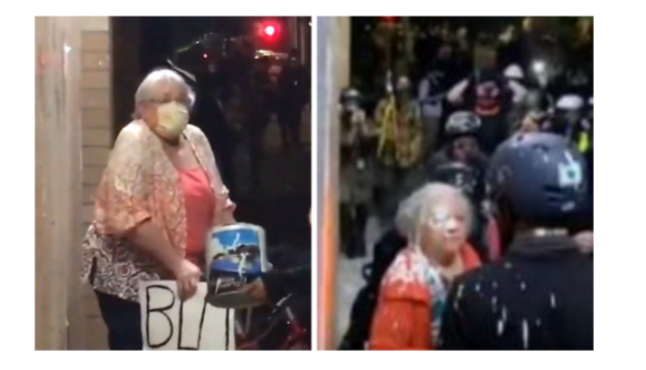 The first, armed only with a walker, a fire extinguisher, and a homemade BLM poster, tried to put out a fire last night in front of East Precinct. In return, she endured harassment and assault from rioters. Watch the videos here, here, here, and here.

The second, armed only with her words, was physically assaulted by rioters who threw paint on her, put hands on her, and yelled in her face. Watch the videos here and here.

Neither of these two innocent members of the public will get justice. None of the rioters who engaged in criminal acts against these two women will be held accountable. Why? Because neither of you will do anything about it.

To Mayor Wheeler, our Police Commissioner: You are telling the Police Bureau what it can and cannot do to maintain the peace. Whatever operational direction you are giving the Police Bureau is not working. Our City is filled with violence. It is reckless for you to handcuff the Police Bureau by telling our officers to intervene only after violence has occurred, but not to take necessary action to prevent violence before it happens. Step up and do your job; let the Police Bureau reestablish peace on our streets and support the Bureau and its officers when they do so.

To District Attorney Schmidt: You ran on a platform of police accountability, which was a thinly veiled threat to indict police officers. What about indicting rioters who loot, burn, destroy, and assault? What about your ethical and moral duties to uphold the law and keep all our citizens safe? The people committing arson and assault are not peaceful protestors; they are criminals. Step up and do your job; hold the rioters accountable. If there is no consequence for crimes from the District Attorney’s office, there is no reason for criminals to stop the chaos.

I am disgusted that our City has come to this. If it is acceptable for rioters to commit acts of violence against community members and to try and burn down occupied buildings, and if this conduct is allowed to continue, then Portland is lost. Our communities demand accountability. That includes you two being accountable to the public. Allow our Police Officers to do the job they swore an oath to do, to stop crime and the fear of crime. Use the criminal justice system to hold criminals accountable for their crimes with actual consequences. Let the Police Chief, his command staff, and the rank-and-file officers do their jobs in protecting the City from the rioters who are bent on destroying our City, burning our police precincts, and assaulting officers or anyone else who gets in their way. Portland has had enough.