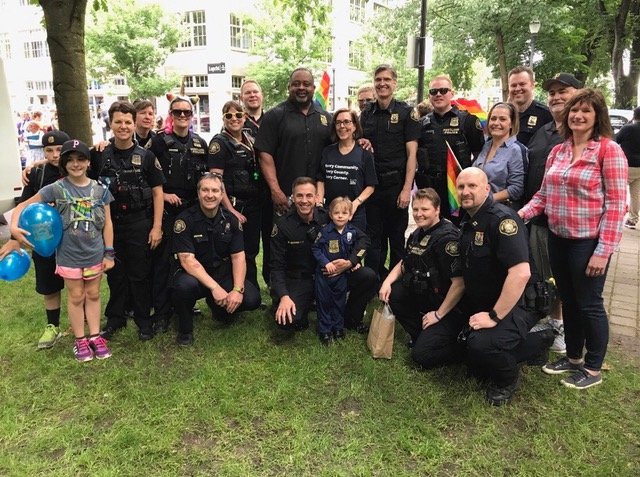 Last Sunday, I joined several Portland Police Bureau members for the Portland Trans Pride March in the Northwest blocks of downtown Portland. The days prior to the event were marred with unexpected controversy that struck at the very heart of the march.

The leadership of Pride Northwest, the organizers of the march, requested that the Portland Police Officers planning to participate in the march not wear their duty uniforms. The reasoning was because “many in the LGBTQ community feel traumatized and targeted by law enforcement.”

This is an organization that whose primary goal is to advocate for and support the LGBTQ community and to ensure that LGBTQ people are treated with equity, fairness, and respect so they don’t have to hide in fear of retribution for who they are. Their mission is to encourage and celebrate the positive diversity of the lesbian, gay, bisexual, and trans communities, and to assist in the education of all people through the development of activities that showcase the history, accomplishments, and talents of these communities.

The Portland Police Association and our members wholeheartedly support this mission and the rights of the LGBTQ members of the Police Bureau as well as the LGBTQ community as a whole. The Pride Northwest letter proved that hypocrisy comes in many forms and to tell a group of individuals to hide who they are and to be ashamed of what they do cuts to no end.

With Chief Marshman, many from the Bureau command staff, and the PPA, in uniform – supporting our members in attendance and our LGBTQ community, we marched proudly to the applause of thousands. We were overwhelmed by the positive support of the crowd and community, many even stepped out to shake our hands and thank us for protecting and serving the City of Portland.

The citizen support made the day a huge success for all involved and the voices of the anti-police rhetoric were silenced.