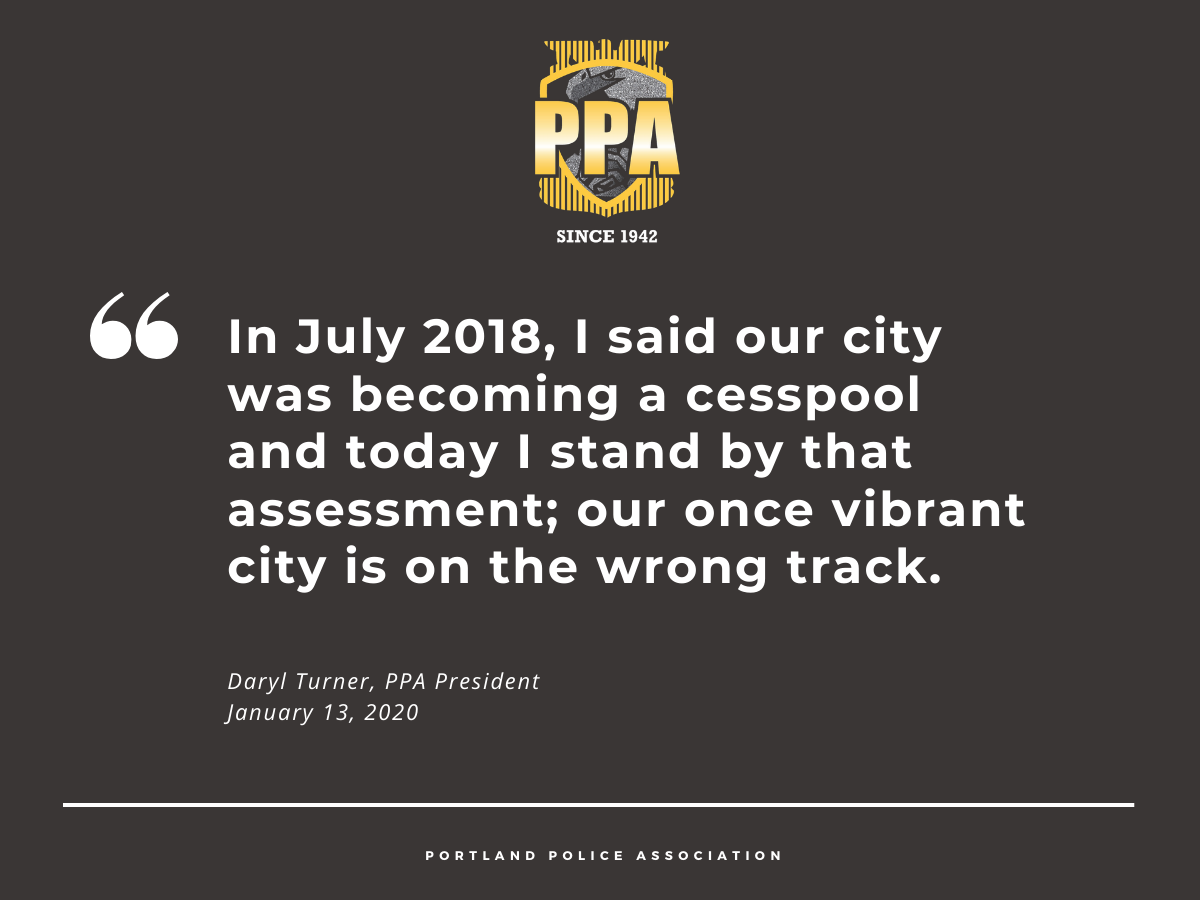 As we move into a new year, the Portland Police Association (PPA) and our members face many challenges. It will take time to adjust to the change in leadership from former Chief, Danielle Outlaw, to our new Chief, Jami Resch, and the realignment of command staff, supervisory staff, and their priorities.

Contract negotiations for both the police and dispatchers is a critical topic for the PPA. But we will not lose sight of the many other important issues we face; particularly, the severe and catastrophic staffing shortage that has a huge impact on how we provide resources to meet the evolving needs of the diverse communities we are called upon to serve.

Our commitment to you, our PPA members, is unwavering. We will not be distracted by the false narratives and self-serving agendas of those who seek to drive a wedge between police officers and our community.

We recently heard a lot about contract concerns from City Hall and the media. On October 1st of last year, activists from the anti-police group Campaign Zero gave a nearly two-hour presentation to Portland’s City Council at Commissioner Jo Ann Hardesty’s invitation. It was obviously choreographed and orchestrated, but it lacked context and fundamental knowledge on the rights all public employees have under collective bargaining laws, the Oregon Constitution, and the United States Constitution.

On top of that, Mayor Wheeler and Commissioner Hardesty hosted two separate community listening sessions to hear priorities for the upcoming negotiations between the City and the PPA. We again saw the lack of basic understanding of public employee rights.

As an organization, the PPA believes our community and residents should have input on public safety priorities. However, my concern is that these two forums were not widespread across the city, neighborhoods, and businesses. The forums appeared to be skewed toward a prescribed outcome and to set unreasonable expectations causing frustration for some community members. The forums also ignored the broader issues faced by our community.

Meaningful conversations about public safety are vital to our evolution as first responders, as an organization, and as a community. Historically, neighborhood associations have been a mainstay for civic involvement, the Portland way of life. At a time when their very existence has come under fire, it’s even more important for the PPA to support and connect with our neighbors to talk about what’s important to them.

Over the past two years, I’ve attended several meetings with neighborhood associations, business associations, and other community gatherings across the City. Residents are frustrated with the City and County’s paltry humanitarian efforts to have adequate resources for those who are homeless, in mental health crises, and experiencing addiction issues. I hear the same things again and again: people don’t see enough police in their neighborhoods; due to limited police staffing, livability issues continue to go unaddressed; our community wants proactive policing to reduce crimes of opportunity; and they are alarmed about gun violence citywide.

Portland police have been called to twenty-five different shootings that showered residential neighborhoods with hundreds of bullets. We’ve seen two homicides and several wounded and we are just into the second week of the new year. This weekend, two unrelated traffic stops by officers with the Gun Violence Reduction Team (GVRT) led to arrests and the seizure of two guns.

The Mayor recently described our city as successful and vibrant. Yet, we continue to spend millions of taxpayer dollars and things are not getting better. For example, the City’s Homelessness and Urban Camping Impact Reduction Program (HUCIRP) reportedly cleaned 2,828 campsites, collected 1,954 tons of garbage, removed 8,000 gallons of human waste, and removed 457,461 needles from July 2018 – June 2019. The problem is worse than ever. And the city just approved an over $22 million contract with Rapid Response over the next five years to continue the cleanup efforts.

While Mayor Wheeler and Commissioner Hardesty were eager to hold narrowly focused forums on the contract, they have neglected to prioritize, with the same sense of importance and urgency, the issues affecting the day to day safety and livability of our communities at large.

In July 2018, I said our city was becoming a cesspool and today I stand by that assessment; our once vibrant city is on the wrong track.

The first responders of this city, the rank and file of the Portland Police Bureau, and the call takers and dispatchers of the Bureau of Emergency Communications—the boots on the ground who do the work—are the foundation of public safety in our city. As the subject matter experts who take the calls for service every day, we are frustrated. We have firsthand knowledge of the fears, anxiety, and frustration of a community disillusioned by empty promises made every election cycle. Through all the changes, I know our officers and dispatchers are and will continue to be the steady driving force in building relationships and trust in the community while providing the highest level of service. The PPA and the community at large support you in your efforts as we move into the new year with new hope and new opportunities.