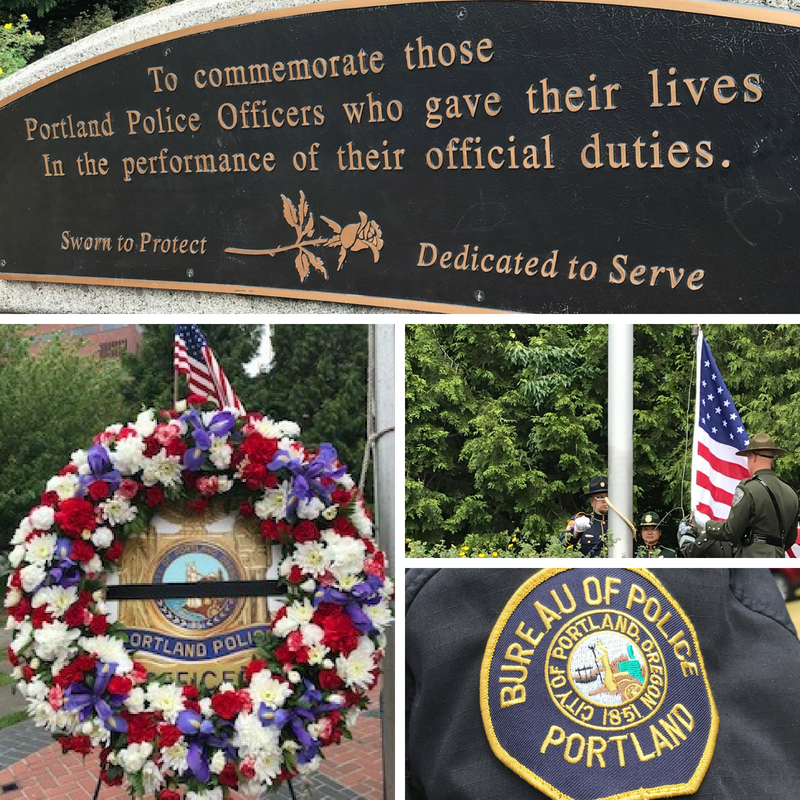 I stand before you today humbled and honored to speak on behalf of the rank and file members of the Portland Police Association as we pay tribute to those who gave the ultimate sacrifice for the safety of the communities they serve. We pay tribute to the families, loved ones, and friends of the heroes who went into the profession of policing because they cared about people, they cared about those in need, and they cared about the most vulnerable among us. They proudly took an oath of a most honorable and noble profession and wore the badge to protect and serve.

When I started my career in law enforcement almost 27 years ago, community policing was already a powerful national movement and very much a part of the everyday job of a police officer. For many years I walked foot patrol in Old Town because this is the way I was taught to engage the community by those who came before me. I made my way in and out of the residences, bars, shops, and restaurants. I knew the shopkeepers, business owners, residents, and criminal element in the area by name and they knew me, too. There was time in the day to both respond to calls for service and engage with our community and that was the very core function of our job.

In the current environment, there is a perception that a gaping crevasse has emerged between police officers and the communities we serve. In reality, much of that perception was created by false narratives from the media, elected officials pandering and those with anti-police rhetoric seeking to promote their own selfish agendas which has created an Us v. Them mentality fed by misinformation and miscommunication. The scrutiny that officers feel every day is almost paralyzing and is equal to the anxiety that many community members feel in regard to the safety of their neighborhoods.

Officers today are tasked with knowing more and doing more with fewer resources, greater analysis, and often in hostile situations. Nationwide, nearly 800,000 police officers put their lives on the line every day for 325 million members of the community. Like the diverse communities we serve officers come in all shapes, sizes, colors, genders, religious backgrounds, and sexual orientations.

We shoulder the burden of all the shortcomings and inconsistencies of the criminal justice system, the mental health system, and a social economic system that that we did not create. We are the first responders in situations where people find themselves desperate, injured, traumatized, and victimized in a society where behavioral and mental health problems, opioid use, homelessness, and illegal access to firearms are all on the rise up.

The stakes are high.

Every call for service means an officer responds to a potentially dangerous situation with unknown circumstances and we do the best we can with the information we have at the time. When our brothers and sisters in blue pay the ultimate sacrifice with their lives we grieve and stand with them in mourning. Then, we go back out and do the job. Policing is not just a job; it’s a calling.

From 2001-2016, 1,865 young men and woman lost their lives defending democracy during combat in Afghanistan. During that same period of time, 2,686 officers were killed in the line of duty, here at home defending that same democracy and the Constitution of the United States in the cities, counties and states where they serve and protect.