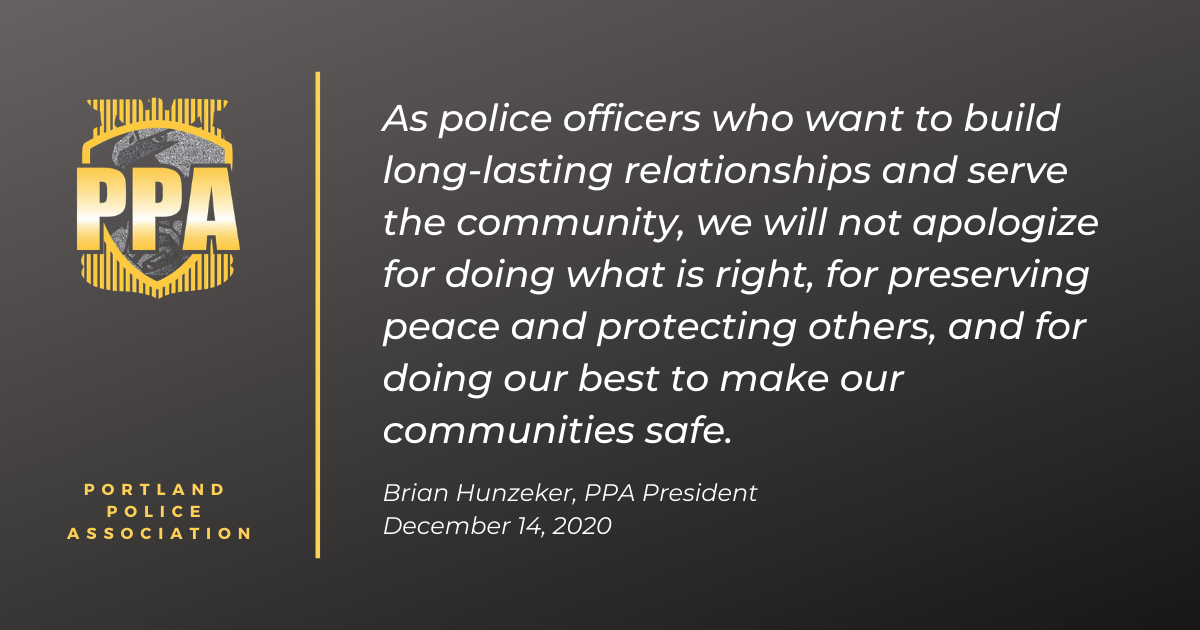 This year communities have suffered more than anyone could have predicted and the police officers in this city have endured more than they signed up for when they took the oath to protect and serve. Officers are tasked with bringing order to chaotic, unpredictable, and dangerous situations. In doing their job, they have been subject to false allegations and been the target of violence, attacks, projectiles, and arson.

The actions of one person do not represent the whole—whether that person is an officer, a reporter, or an elected official. Yet the public has been fed a false narrative that the actions of one officer over 1,000 miles away are the actions and intent of our officers; this is not true. A Portland Police Bureau officer is NOT the officer that killed George Floyd. The noise—misinformation and disinformation spread without context—is harmful to all of us.

The citizens of Portland deserve accountability.

They deserve accountability of our police officers that continue to show up day and night to protect and serve.

They deserve accountability of our elected leaders to enact policies and enforce the laws; to keep our communities safe from armed activists using force, intimidation, and extortion with complete disregard of any form of government, forcing their will on lawful citizens.

They deserve accountability of our elected district attorney who has expressed the notion that the lawless can claim free speech and get away with nearly anything. He has failed our community. His permissive policy places the law-abiding citizens of Multnomah County at risk.

As police officers who want to build long-lasting relationships and serve the community, we will not apologize for doing what is right, for preserving peace and protecting others, and for doing our best to make our communities safe.

We refuse to be intimidated and instead are motivated to build stronger relationships and trust with all our communities. The Portland Police Association will do our part and be a partner in police reform and accountability. And all our elected officials must also do their part to hold those who victimize others accountable for their actions.