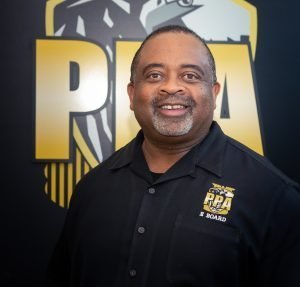 Officer Daryl Turner attended Central Washington University and is a United States Army Veteran. He began his career with the Portland Police Bureau as a uniform patrol officer in 1991 and over the years has been a part of the Gang Enforcement Team, Drugs and Vice Division, and Training Division. He was elected to the Portland Police Association (PPA) Executive Board in 2000 and is now serving his 4th term as PPA President. In 2015, he launched the Oregon Coalition of Police & Sheriffs and serves as President advocating on behalf of Oregon law enforcement in the state legislature. In 2017, he worked to establish an organization that brings together law enforcement nationwide in a unified voice and served as the founding president of the United Coalition of Public Safety.  As a 1998 recipient of the Portland Police Bureau Meritorious Service Medal for Valor and a 2006 recipient of the Optimist Club Memorial Officer of the Year Award, his commitment to excellence in policing was showcased. In addition, Officer Turner’s 40+ letters of commendation prove his dedication to protecting and serving our community.

Lead negotiator for the Portland Police Association negotiating multi-million dollar collective bargaining agreements with the City of Portland in 2010, 2014, and 2016.

President of the Oregon Coalition of Police & Sheriffs (ORCOPS), a non-partisan organization that advocates on behalf of police officers, deputy sheriffs, and other individuals in Oregon law enforcement agencies. ORCOPS serves as a source of leadership within the law enforcement community and aims to build trust between law enforcement officers and the communities we serve.

Founding President of the United Coalition of Public Safety (UCOPS), working on behalf of law enforcement officers and the communities they serve nationwide to shape strong partnerships and break down communication barriers; building trust through active engagement, honest dialogue, education, and outreach.