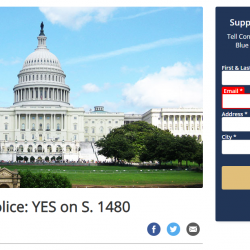 Public safety officers come under attack all too frequently in the United States, simply for doing our jobs. The Portland Police Association is a founding member of the United Coalition of Public Safety (UCOPS), a national coalition of law enforcement unions. UCOPS has launched a digital ad campaign to support U.S. Senate Bill 1480, the “Back[…]