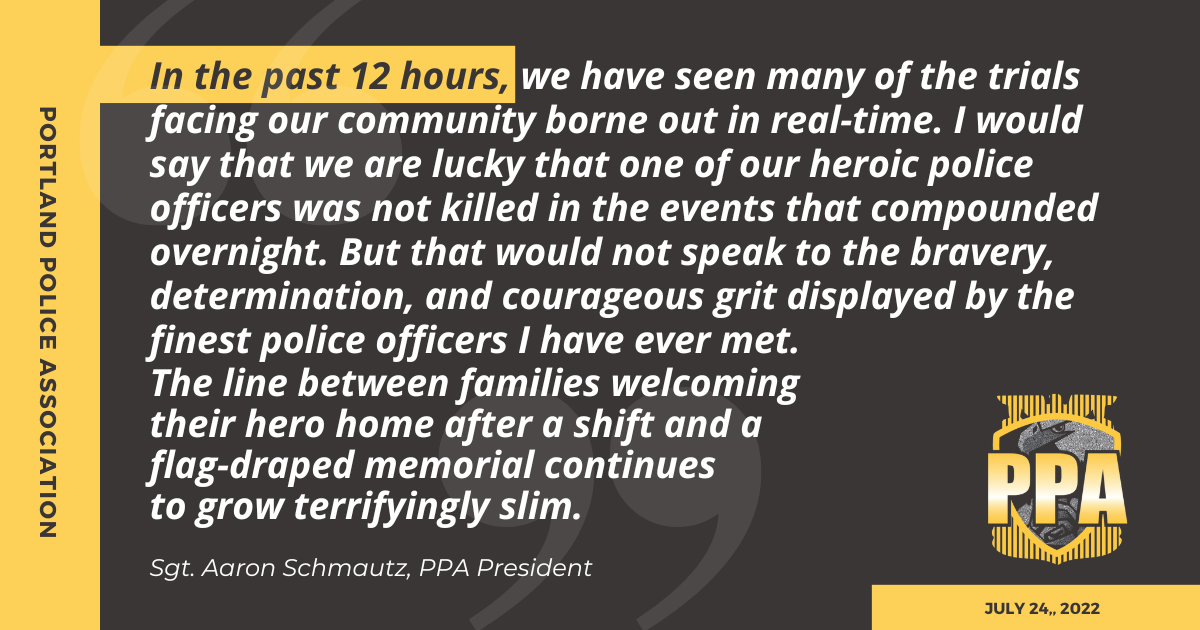 Police work is many things. It is often slow, even mundane. It is often chaotic and dangerous. Police officers are an extension of the trials facing any community. In the past 12 hours, we have seen many of the trials facing our community borne out in real-time. I would say that we are lucky that one of our heroic police officers was not killed in the events that compounded overnight. But that would not speak to the bravery, determination, and courageous grit displayed by the finest police officers I have ever met. The line between families welcoming their hero home after a shift and a flag-draped memorial continues to grow terrifyingly slim. So let us consider the trials.

The contagion of domestic violence produces a call for service. Officers respond to these “routine” calls every day. Upon arrival, a suspect tries to murder the officers, narrowly missing one with a gunshot. Only through breathless courage and guile are the officers able to restore peace to our community and save both their lives and the lives of our citizens. These critical close calls have metastasized in our city. This is the third time in less than a year that a Portland Police officer has had a gun fired at their head, narrowly missing, not to exclude all other moments of police officers being shot at or viciously assaulted.

PS3s, a vital cog in our public safety infrastructure, respond to recover a stolen car. Portland leads the country in stolen car investigations. A suspect is on scene, and he runs over a responding police officer with his car, causing significant injury. The response to this incident strips the city of police resources due to the critical staffing shortage we currently face.

Officers respond to a subject who is not responsive and unchecked. Again, “routine.” The subject has a warrant and violently attacks two police officers. For 6 minutes, officers fight with the subject who is focused and motivated to escape. Cover takes significantly longer than normal to respond due to the previous two incidents and our overall lack of resources, and only when further help arrives are they able to take the subject into custody. Once again, two officers are injured in the struggle.

12 hours. Multiple officers nearly murdered, three hospitalized, and a vital city resource—the entirety of the public safety infrastructure—ground to a halt. These expounding problems begin with culture and the only remedy is courage.

We must all stand and join in creating a culture of accountability in our city. Criminals must be held to account for their actions. They must be apprehended, held, charged, and prosecuted to ensure that public safety is maintained. Attacking public safety officers must be treated as the assault on all of society that it is, and the consequences must be severe.

We must all recognize that the path to an accountable, professional police force is to focus not on continuing the destructive second-guessing of every single event. It is not through endless audits, reviews, and haranguing of split-second decisions. It is paved through all levels of leadership and governance having the courage to stand by those who step forward and providing all support, resourcing, and funding to ensure that Portland’s brave heroes can keep our city safe and go home after their shift.

These past 12 hours shock the conscience. Half measure cannot suffice. Our commitment to those who are willing must endure.